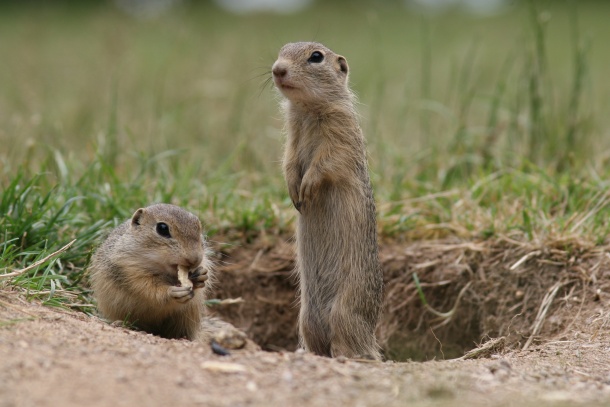 The European ground squirrel (Spermophilus citellus) commonly known as souslik, is a small, socially-living rodent of the squirrel family. They are diurnal, meaning they are mainly active during the day, returning to their burrows at night. Their burrows are extensive and they use them to both sleep in at night and for hibernation throughout the autumn and winter months. Whilst predominately herbivores, feeding on grasses, seeds and other plants, they will take advantage of insects or young voles if the opportunity arises.

Once a common inhabitant of lowland grasslands in the Czech Republic, they are now a protected species with their Czech conservation status now critically endangered. They are limited to around 35 isolated communities and they are considered one of the most endangered mammals in Europe. As a protected species, it is forbidden to catch, kill them or destroy the burrows. They are threatened primarily by changes in the Czech and Moravian landscapes such as land consolidation, agricultural intensification and also, on the contrary, the abandonment of land such as meadows and pastures. These changes have destroyed their preferred habitats like short grasslands. Currently, most communities live in small isolated grassland sites such as campsites, golf courses, airports and the natural steppe.

Find out how to identify a souslik in the wild.

What do sousliks do in winter?

What are sousliks doing in the autumn and winter months? Sleeping!

A day in the life of a souslik

After waking up from hibernation, sousliks days are full of action…

How do I recognise a souslik?

Sousliks are ground dwelling rodents, from the same family as squirrels. They are small, around 20cm, and weigh from 200-300g. Males are generally larger than females but otherwise they look alike. Their bodies are generally slender yet they try and put on as much weight before they hibernate in the...