The Czech Republic and Slovakia are looking for sousliks 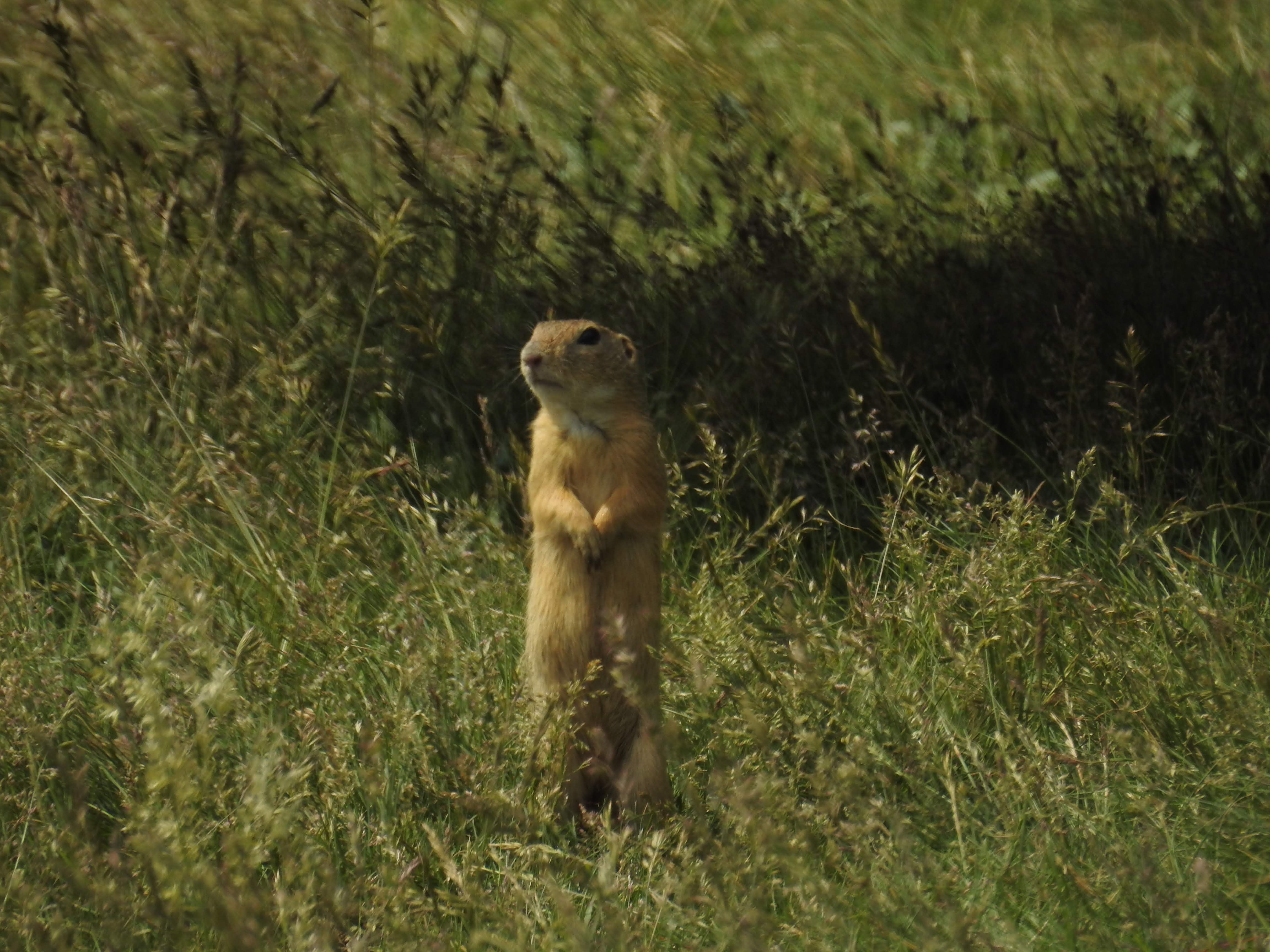 The Czech Republic and Slovakia are looking for sousliks. Experts, with the help from the public, are mapping their distribution after their hibernation.

Now that spring is in the air, the winter hibernation of sousliks comes to an end. Another monitoring season of this critically endangered mammal can begin. Experts in South Moravia and in Western Slovakia are heading back into the field, but the mapping of the sousliks can be very challenging, so they welcome public help.

The European ground squirrel, otherwise known as the European souslik or simply souslik, is a critically endangered rodent. It has almost disappeared from our countryside and has become the focus of some nature conservationists and researchers who are now trying to map out its remaining populations. As it hibernates for more than half a year, the monitoring period is limited by the time they are active. And it is this period, which is just beginning.

So, how does mapping of sousliks happen? Ervín Hapl, mapping coordinator from Living Plain, a non-governmental organisation in Slovakia, explains:

“At the sites we know, we‘re trying to count the number of individuals in the colony. This can be estimated by counting freshly opened entrances to burrows. Upon awakening from hibernation, sousliks will instinctively dig a new, vertical hole directly to the surface. These new, fresh holes can then be distinguished from last years. We also put sunflower seeds at open burrows to help the sousliks overcome food shortages and support colony development during early spring.”

But feeding can also be harmful to sousliks, as the director of Species protection and implementation of international commitments department of the Ministry of the Environment of the Czech Republic, Jan Šíma, warns:

“Sousliks naturally consume a rather simple diet, composed primarily of plants and their seeds. Feeding them pastries or kitchen remnants, for example, and even large amounts of fruit, is not appropriate for them.”

Supporting the sousliks with food is therefore better left to the experts, but it is possible to help with mapping. Some of the smaller souslik colonies may have, so far, escaped the attention of experts. Therefore, in the spring, they aim to look for sousliks in new areas, by both checking for burrows and from direct observations. When walking through the countryside, sousliks can be seen and heard during the day. When in the grass, they often stand on their hind legs to keep track of predators and other dangers. At this time, you may be able to catch a glimpse of them. Sousliks can also be found by listening out for their characteristic alarm call, a short high-pitched squeak, which they use to warn each other of danger. Monika Chrenková, from Daphne Institute of Applied Ecology, explains the difficulties in searching for sousliks in Slovakia:

“The souslik is commonly found in agricultural landscape. In Slovakia, they are often found in large pastures which makes finding them not so easy.”

Kateřina Poledníková, mapping coordinator from ALKA Wildlife o.p.s., describes what it’s like on the other side of the border in the Czech Republic:

“Our researchers cover great distances when mapping sousliks in the spring. In contrast to Slovakia, our environment includes vineyards and orchards, and this is another area where we find sousliks. Also, they can be found in areas on the outskirts of villages. The environment can be very difficult to map, especially when the vegetation is green, so it is important we cover as much as possible at the beginning of spring.”

Sousliks occur in both the Czech Republic and Slovakia in small, isolated colonies. Mapping their occurrence is the first step taken in their conservation. This is followed by further monitoring, protection and implementation of measures to support the population. Monika Chrenková describes the activities of conservationists in Slovakia:

“Depending on how the site looks, we are trying to improve their environment by mowing grass, pruning surrounding bushes, regulating grazing and planting fruit trees.”

Jan Šíma adds how others can help support souslik colonies:

“Landowners and farmers can help the souslik colonies with methods such as maintaining or restoring the varied mosaic of landscapes within traditional vineyard, orchard and grassland management. Limiting pesticide use also plays a crucial role.”

On the Czech side, support for ground squirrels in agriculturally exploited areas is already taking place, particularly through cooperation with landowners under the umbrella of the trademarks “Souslik friendly vineyard” and “Souslik friendly orchard”. Through this, the public can support sousliks again by buying wine or apricots from growers who create suitable environments for sousliks on their land and report their observations. Kateřina Poledníková concludes:

“We appreciate all help from the public. It can be as little as people having a look around in their local environment during their spring walks. Local people sometimes already know that sousliks live in their orchards or pastures but not everyone realise the scarcity of these animals. We welcome all information the public might have regarding sousliks.”

So, how do you actually recognise a souslik?

The souslik is a medium sized rodent, weighing approximately 200 to 350 g and measuring about 20 cm. It has brownish fur with small ears, large eyes and a short, tufted tail. Unlike other rodents which you may not see, it is day active, so you have more chance of catching a glimpse of it. When they stand on their back legs, you can‘t mistake them. Their burrows are relatively large, with a diameter of 5 to 6 cm. There will be freshly dug dirt at the entrance to the burrows as when they dig, they kick the dirt out behind them. On the other hand, the sousliks vertical burrows, which they dig from underneath, are sharply cut and will be perfectly straight, vertical holes deep into the ground.

Your observations or queries can be sent to: 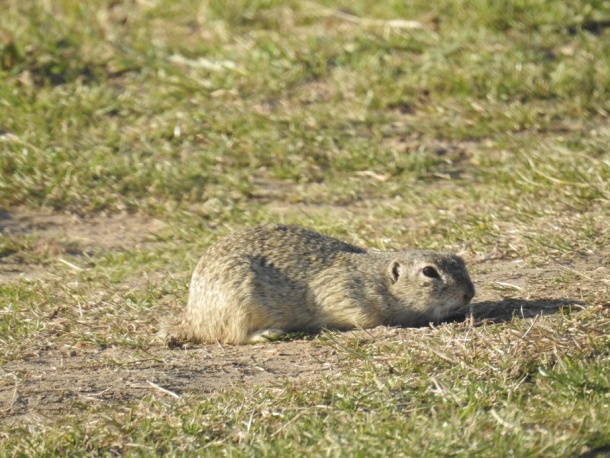 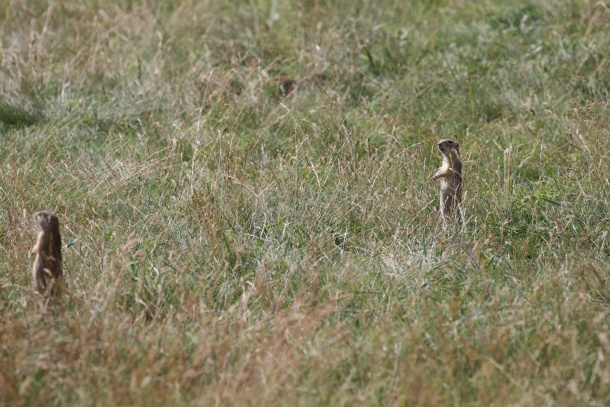 When they stand on their back legs, you can‘t mistake them. 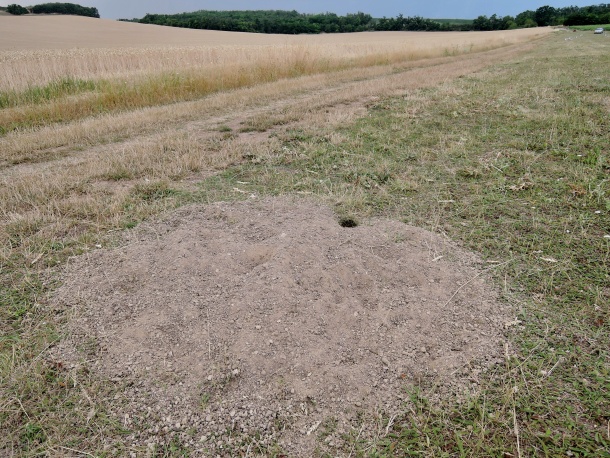 Washed out ground squirrels at the Biele Vody locality, S... 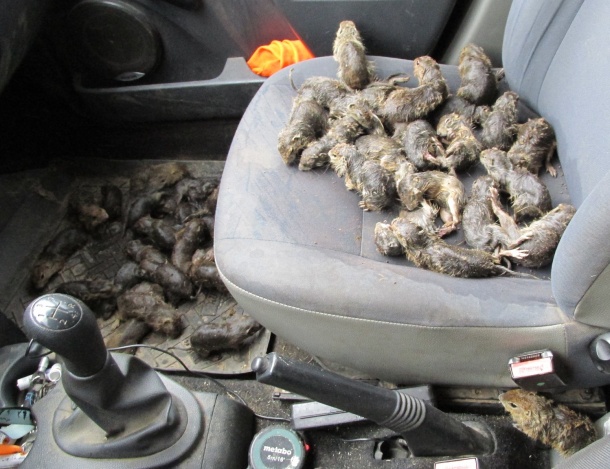 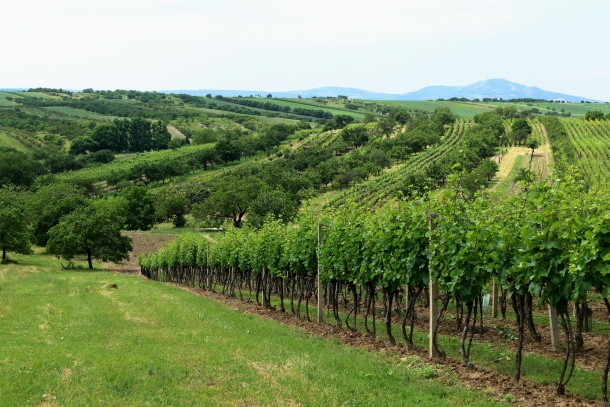 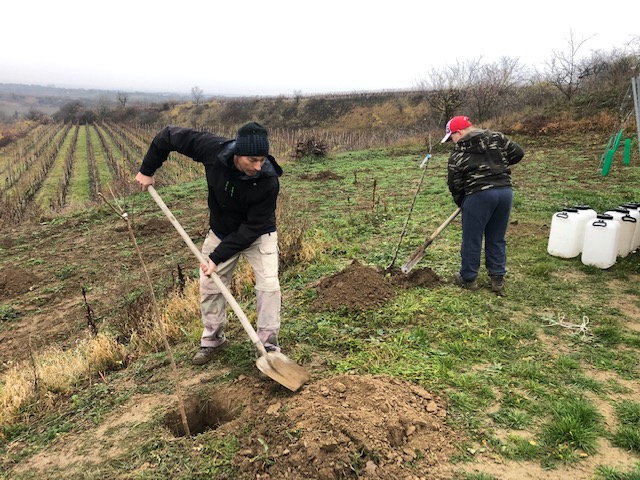 In November 2019, over 20 volunteers gathered on the overgrown steppe slopes in Lizniperky. 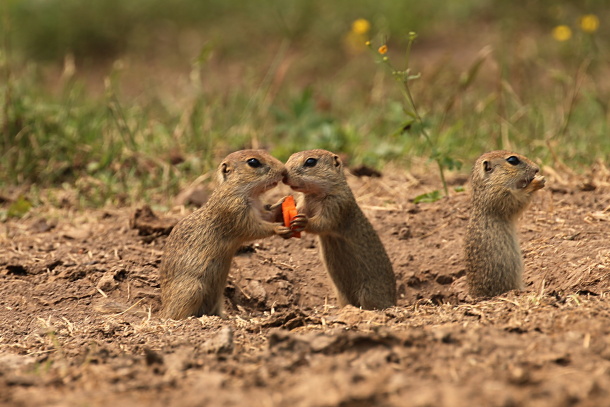 At the end of November, a conference on European ground squirrels will take place in Velké Pavlovice.
ALKA Wildlife, o.p.s. © 2021